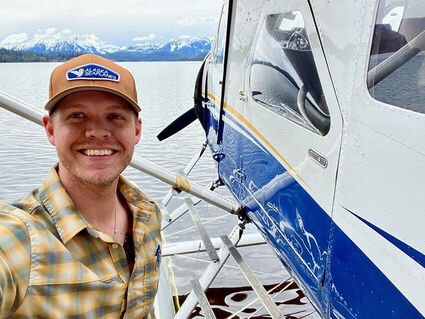 Country music singer Sam Riggs, who was hired this year as a pilot for Alaska Seaplanes, took a selfie standing on the float of a de Havilland Beaver aircraft.

Next time you're on a flight with Alaska Seaplanes, your pilot might be a country music star.

Sam Riggs, a singer and songwriter with more than 30 million streams on Spotify and 30,000 subscribers, is also a pilot for the regional air carrier.

When Riggs, 34, is not on tour, he often flies the company's Juneau-Haines-Skagway route.

Riggs, his wife, Rachel, and their 21-month-old son, Rock, moved to Juneau from Texas in January.

"Life was super hectic," Riggs said. He was on tour much of the time. And Rachel, a helicopter pilot in the Gulf of Mexico, worked two weeks on, two weeks off, he...