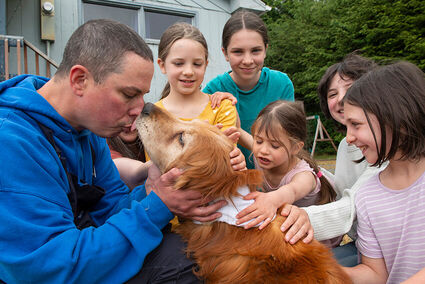 Ted Kubacki gets a lick from the family golden retriever, Lulu, outside their house after being reunited last Thursday in Sitka. The elderly, blind dog who had been missing three weeks, was found by a construction crew in salmonberry bushes after initially confusing her for a bear. Behind Ted is his wife, Rebecca, and their children Ella, Viola, Star, Lazaria and Olive.

SITKA (AP) - The family had given up hope of finding their blind, elderly golden retriever who wandered away from their Sitka home three weeks ago, but a construction crew found Lulu in salmonberry bushes after initially confusing her for a bear.

Lulu was barely alive after being found July 5, but she is being nursed back to health and is back home with her family, the Daily Sitka Sentinel reported.

"She means everything," owner Ted Kubacki said. "I have five daughters and they're 4 to 13 years old, so they've spent every day of their life with that dog."

The Kubacki family searched for wee...