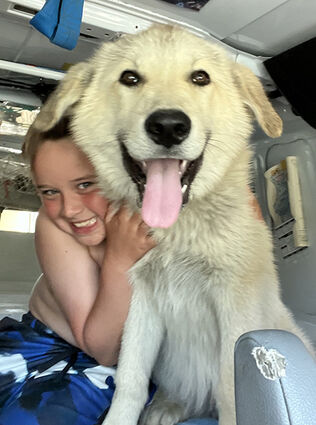 Archie Dunbar, 7, smiles with puppy Biscuit, one of at least 10 dogs born in Haines this spring that the state suspects could be part wolf. The owner of the litter's mother said her dog might have inadvertently mated with a gray wolf in a rural part of the borough. Wolfdogs are illegal to breed or possess in Alaska.

While thousands danced and dined at the Southeast Alaska State Fair in Haines last weekend, Drew Robertson of Sedalia, Colorado, was rescuing a half dozen puppies that might be part wolf.

The state suspects at least 10 dogs born at 35 Mile Haines Highway in February could be wolf hybrids, which are illegal to breed or possess in Alaska.

The owner of the litter - "Seandog" Brownell - said he suspects the mother, Inja, a lab, could have mated with a wild wolf last December on or near his property.

Robertson, who runs an organization with wolfdog sanctuaries in the Lower 48, picked up six o...