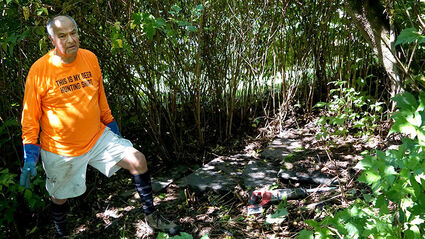 Peter Karras, of Sitka, works on clearing away salmonberry bushes and other vegetation from stone stairs that were built just up the hill from downtown Wrangell sometime in the early 1900s. He found out about the steps from Wrangell resident Frank Young, who used to run up and down the stairs in his youth.

Uncovering historical items can have its ups and downs. In some cases, that's the literal truth.

Somewhere around 1915, a set of stairs was built that saw a lot of use over the next 80 years. But they began to fade like an old photograph until suddenly they disappeared.

It wasn't until a couple of weeks ago that the stairs were found, leading to a conversation about their place in Wrangell's history.

Peter Karras, of Sitka, was in town on a visit in mid-July. Not one to be idle, he was cutting down some trees for Frank Young, who lives on Third Street.

"He said there's some steps over here...