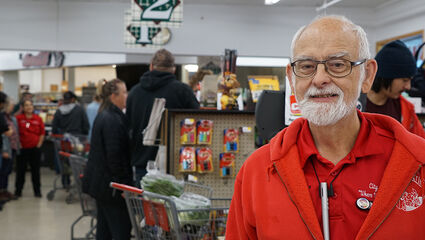 Benn Curtis, owner of City Market, attended a retirement party held in his honor last Saturday. Curtis retired after 58 years working at the store. He began when he was almost 15 years old.

Another chapter closed in the long history of City Market last Saturday. Owner Rolland Benn-Ingles Curtis - or just Benn as most people know him - retired after 58 years of serving the community.

Curtis, 73, began working at the store in 1964 when he was almost 15 years old after much discussion with his father, Rolland. Had Curtis not agreed to work at the store, its story could be much different today.

"He said, 'If you're not going to work in the store, I might as well get rid of it ... and you're on your own,'" Curtis said, recounting the conversation he had with his father. "The store...