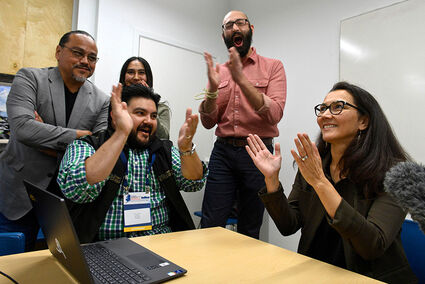 Mary Peltola (right) reacts Aug. 31 to the results of the special election in which she won the race for Alaska's seat in the U.S. House of Representatives. From left are Peltola's husband, Gene Peltola Jr.; deputy campaign manager Hector Jimenez (seated); Peltola's stepdaughter Kaeli Peltola; and campaign manager Anton McParland.

As a young teenager growing up in Bethel, Nikki Corbett got her first paid gig from Mary Peltola.

"I babysat her oldest," said Corbett, who took care of Peltola's eldest son.

Corbett, who lives on the Kenai Peninsula and is raising children of her own now, was one of the many Indigenous Alaskans from around the state who flooded social media with exuberant messages, reflections and recollections in the hours after Peltola's victory in Alaska's special U.S. House election was announced.

The Alaska Division of Elections on Sept. 2 certified the results of Alaska's first ranked-choice voting t...