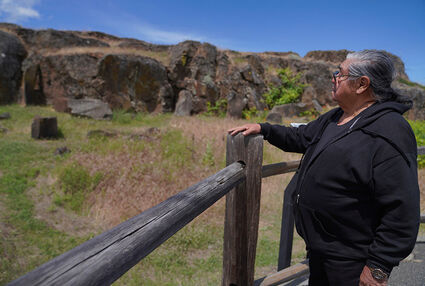 Wilbur Slockish Jr., a river chief of the Klickitat Band of the Yakama Nation, looks at petroglyphs in Columbia Hills Historical State Park in June in Lyle, Washington. In the 1980s, Slockish served 20 months in federal prison on charges of poaching salmon from the Columbia River. He says he went to prison to fight for his people's right to practice their faith.

THE DALLES, Oregon (AP) - Wilbur Slockish Jr. has been shot at, had rocks hurled at him. He hid underground for months, and then spent 20 months serving time in federal prisons across the country - all of that for fishing in the Columbia River.

But Slockish, a traditional river chief of the Klickitat Band of the Yakama Nation, would endure it all again to protect his right of access to the river and the fish that his people believe were bestowed to them by the Creator.

"It's a sacred covenant," he said. "Nothing's more important."

Tribal fishermen like Slockish have drawn the ire of commerc...