Haines bicyclist finds a 30-pound mushroom just off the highway 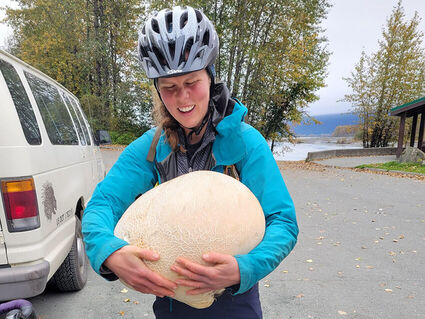 Haines resident Liza Landes was on a bike ride when she thought she spotted a large rock off the highway - but it turned out to be a 30-pound mushroom.

Liz Landes found a 30-pound puffball mushroom while on a bike ride on the Haines Highway.

She said she was enjoying her bike ride when she spotted something unusual. "I looked up from the highway and saw what initially looked like a river rock," Landes said. "I turned back and hiked up the hill and was totally amazed. I didn't necessarily have the intention of taking it, but it broke off the ground more easily than I thought."

Landes had found a giant puffball mushroom, a fungi typically found in central and eastern North America. Equipped with only a backpack, she needed help bringing th...