It's no trick, the Jabusch home is a Halloween treat again this year 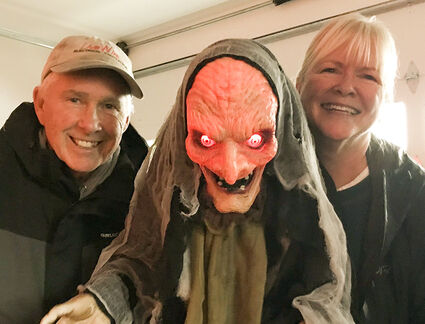 Jeff and Kay Jabusch are ready with their motion-activated witch for this year's Halloween decorations at their home. The couple is excited to share their new selection of ghoulish decorations with trick-or-treaters after a garage fire last year destroyed their display.

Calling all candy lovers - a year after a blaze destroyed the Jabusch garage, the family's renowned Halloween decorations are back from the dead, with enough inflatable monsters and spooky skeletons to terrorize an entire army of trick-or-treaters.

Kay and Jeff Jabusch aren't certain what caused last year's fire, though they suspect an old light bulb may have overheated and ignited nearby drapery. Instead of their usual festive fare - lights, grinning skulls and ominous signage directing trick-or-treaters into the decked-out garage - Jeff and Kay put a smoke machine in the wreckage on Ocea...