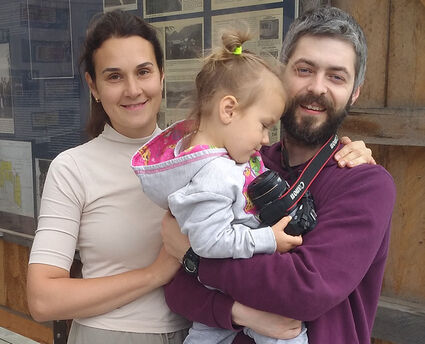 Standing in Petersburg's Cannery Park, Arsen Tatizian holds his daughter Kateryna alongside his wife Snizhana. Arsen was able to get his family out of Ukraine after the war started, bringing them to live with him in Petersburg, where he works for a seafood processor.

When Ukrainian Arsen Tatizian arrived in Petersburg in February he did not think he would be staying in Alaska beyond the end of his contract with OBI Seafoods, much less with his wife and his daughter at his side.

It was his second year working for OBI, though he spent his first summer at its other plants in Alaska.

He was only in Petersburg for two weeks before Russia invaded Ukraine. While he continued with work, his mind was on the safety of his wife Snizhana and their 2-year-old daughter Kateryna, or Kate in English.

They were living in Odessa, a port city on the Black Sea in the south...