Volleyball team nets No. 1 seed for regionals; wrestlers take down competition in Ketchikan 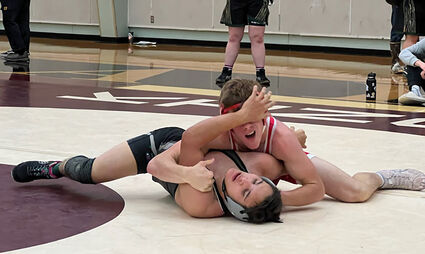 Ethan Blatchley, in red, counters a move made his opponent at the Bill Weiss Tournament in Ketchikan last weekend.

The Wrangell High School girls volleyball team left on Wednesday for the Southeast regionals in Klawock, having earned the No. 1 seed.

The squad beat every team in four days of competition Nov. 5-8 in Skagway, winning 18 out of 20 sets, to win the No. 1 seed going into regionals. The Lady Wolves were supposed to travel to Petersburg last weekend to compete but the trip was canceled due to students being ill, said head coach Alyssa Allen.

Wrangell played Metlakatla and Petersburg in its final two matches in Skagway, besting both teams. The total scores from the tournament are: