One safe and one missing after boat accident near Point Baker 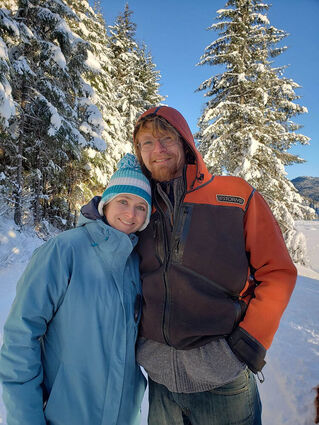 Search and rescue efforts were suspended at 10 p.m. on Monday for Arne Dahl, of Point Baker. His partner, Kelsey Leak, was rescued from the boating accident.

Former Wrangell residents Kelsey Leak and Arne Dahl were involved in a boating accident late Sunday afternoon. By mid-afternoon Monday, Leak had been picked up by a nearby fishing vessel. As of Tuesday morning, Dahl had not been found.

The couple was boating near Point Baker and Point Protection, roughly 40 nautical miles west of Wrangell.

Leak, who survived the accident, spent Sunday night on one of the West Rocks, in the area around Point Baker and Point Protection.

"That was a feat by itself," said Wrangell Fire Department Chief Tim Buness. "The temperatures, we probably had 26 degrees. To be soaking wet and hanging out on a rock where there is probably no place to hide - that's exactly where she was."

The Sentinel was unable Tuesday morning to confirm the exact location or size of the island or rock where Leak spent the night.

On Monday afternoon, after Leak was picked up, the Coast Guard sent out an emergency broadcast to mobilize area community members to help search for Dahl.

"I got a call at about 10 minutes to 2 yesterday," Buness said Tuesday. "In our conversation (the Coast Guard) requested our assistance." The Fire Department sent out a plane for two hours but did not locate him.

The Coast Guard performed two helicopter search runs, the latest around 10 p.m. Monday, before returning to Sitka. "I believe they were going to suspend the search at that point," said Buness.

Leak announced the couple's intention to move to Point Baker to live off the grid in an Oct. 24 Facebook post. She was previously a physical therapist at the SouthEast Alaska Regional Health Consortium's Wrangell Medical Center.