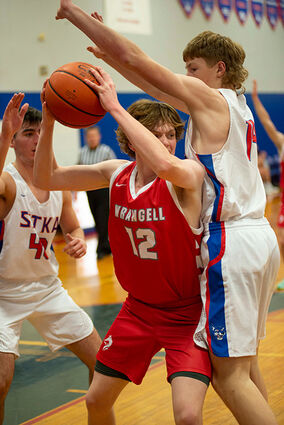 Trevyn Gillen, No. 12, is flanked by two members of the Sitka High School boys basketball team. Gillen and his teammates played against the varsity squad of the 3A school twice over the weekend, once against its junior varsity team and once against Nikiski.

The Wrangell Wolves had a preview of what's to come in this season's basketball tournaments, and the team has its work cut out for them.

On Thursday, the team was supposed to compete against Kodiak High School, but the Bears were canceled by foul weather. Instead, the Wolves took on the Sitka junior varsity team.

It took Wrangell time to get points on the board, finally scoring after more than...