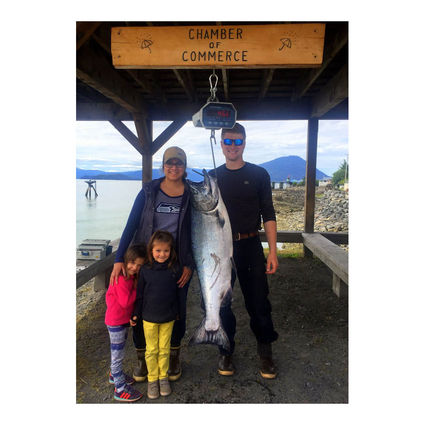 submitted by Wrangell Chamber of Commerce

Malia and Abe McIntyre and their children, Myla and Andrea, stand with the winning fish Malia caught on June 10 of Found Island. The 46.7 pound king topped the chart for the 2016 King Salmon Derby, a local tradition for 64 years. In addition to the $6,000 prize, McIntyre also won the Week 4 $500 prize and silver salmon bracelet, valued at $350.

Wrangell's 64th Annual King Salmon Derby wound to a close on Sunday, with the winning fish snagged only two days before.

Fishing with her family near Found Island on Friday, Malia McIntyre reeled in a 46.7 pound Chinook. Her catch not only wins her the $6,000 grand prize, but also the $500 weekly prize and $350 silver bracelet, awarded to the woman with the largest entered fish.

A full list of entrants and prize winners is available at the Chamber's homepage, at http://www.wrangellchamber.org/. All derby ticket holders are invited to attend at 6:30 p.m., as they have been included for additional drawings.

The Chamber reported 836 tickets were sold as of Tuesday, down from last year's 912. There were only a few changes to this year's derby from past contests, including additional weigh-in stations and extended hours. Tickets this year cost $5 extra, which went toward paying for weigh-in attendants, as well as a new fourth place prize worth $1,000. Derby committee chair Shawn Curley said they hadn't put the decline down to any particular reason, though the relatively smaller fish and state of the economy were offered as possibilities.

"The run didn't really come in that we thought was going to come in," he said.

Before McIntyre's catch over the weekend, Elmer Mork Jr. had led the table since May 24 but at 40 pounds, the fish would have been the smallest on record for Wrangell's derby. Unusually, all other runners up weighed in at the 30-pound range.

Since 2000, only two winning salmon have weighed more than 50 pounds, in 2004 and 2009. Through the 1990s only three winners weighed in the 40-pound range, while in the decade before it no prize fish came in at less than 51 pounds. The largest salmon ever entered was early on in the derby's history, a 74.4 pound monster caught by Doris Iverson.

While derby winners aren't the surest means to evaluate fish stocks, their declining size matches an overall trend. A study funded by the Alaska Department of Fish and Game and published in June 2015 verified that the average size of Pacific king salmon have indeed been declining over the past 30 years, or six generations of fish.

This is in part attributed to the decline of older and larger ocean-age salmon in all stocks. King salmon spend a majority of their lifetimes at sea, bulking up and preparing for a return to spawning streams. The decline of four- and five-year fish in particular has been noted among observed populations, and the study found that three-year and younger salmon were not growing as large as first projected.

"Size-selective harvest may be driving earlier maturation and declines in size, but the evidence is not conclusive, and additional factors, such as ocean conditions or competitive interactions with other species of salmon, may also be responsible," the study reports in its abstract. 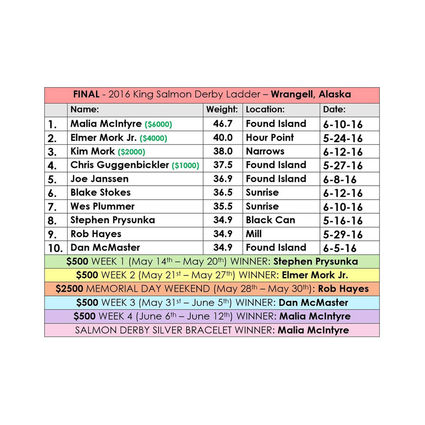 Examining existing data, it finds the Pacific salmon population is currently at an all-time high due to large-scale hatchery production, and that the ensuing competition for resources may be influencing their weight and age of maturation. The report suggests this could have implications for the long term viability of Alaska's fisheries as a result, with the fitness and fecundity of returning king salmon being adversely affected.

"Right now it's pretty rare for us to see a five-year old fish," said ADFG management biologist Patrick Fowler. He pointed out the Lewis report was one of many being considered by the department. While not directly affecting management policies, the trend identified in the study plays an important role in its ability to forecast.