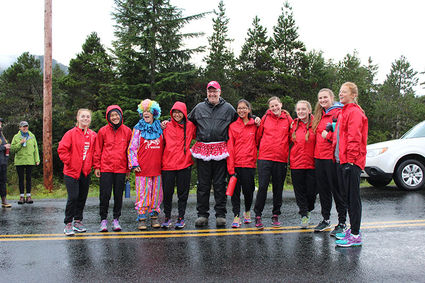 Clowning around with the cross-country girls, teacher Anne Luetkemeyer (third from left) and secondary schools principal Bill Schwan (at center, wearing a skirt) show support for the team before Saturday's invitational in Wrangell.

Ten high school teams made it to Wrangell over the weekend, with over 200 students taking part in an invitational cross-country meet.

Hosted by Wrangell High School, participating runners gathered at the 40 mph sign on Ishiyama Road early Saturday, the starting point for the five-kilometer course. Intermittent rain paused for the two races, which were split between men and women.

Wrangell's route cycles twice along the paths of Muskeg Meadows Golf Course, a hilly, muddy trail which posed a challenge due to the recent rainfall. One student during the mens event even lost a shoe on the course...