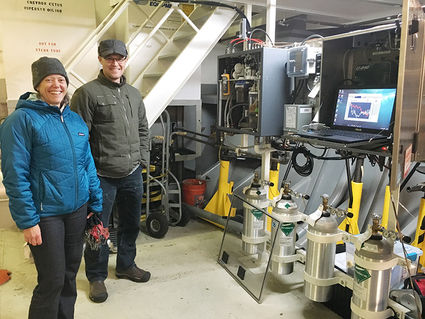 Alaska Coastal Rainforest Center director Allison Bidlack and researcher Wiley Evans of the Hakai Institute prepare a monitoring unit onboard the M/V Columbia, which began collecting data late last month for a regional ocean acidification study. The information it gathers will be used to fill in a data gap along the Northwest coast as the ferry travels between Skagway and Washington.

One of the state's public ferries will help collect data on ocean acidification during its regular route.

The news was announced last week by Alaska Coastal Rainforest Center at University of Alaska Southeast, which has partnered with the Alaska Marine Highway System, British Columbia's Hakai Institute, Alaska Ocean Observing System and other federal agencies on the project.

The vessel chosen for the data collection study is the M/V Columbia, which at 418 feet and a gross tonnage of 3,946 is the ferry system's largest. On its route between Bellingham, Washington and Southeast Alaska, a sea...