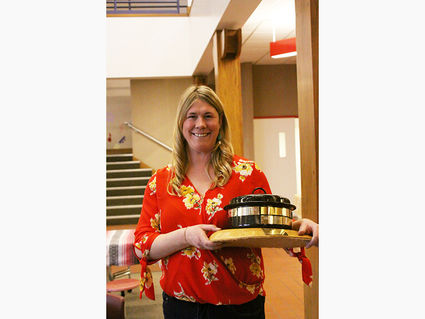 Jeanie Arnold, the winner of last weekend's chili cookoff hosted by KSTK. Arnold's Southwest Chicken Chili took first place in the contest, and also won in the "most original" category. Arnold won the cookoff in 2014, as well.

Radio station KSTK, hosted a chili cookoff last Saturday. The cookoff is an annual fundraiser for the radio station, according to June Leffler. It was hosted in the Wrangell High School Commons this year. Almost a dozen different chilis were entered into the contest, each with a different flavor and level of spiciness. The top three winners were selected, with the first place winner getting their name put on a crockpot trophy. This year's winner was Jeanie Arnold, who also won the cookoff in 2014. Her "Southwest Chicken Chili" was declared the best by a panel of six judges. Arnold's chili a...