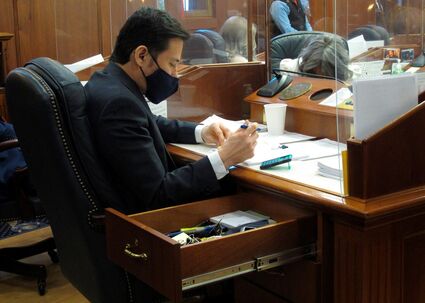 Nome Rep. Neal Foster, co-chair of the House Finance Committee, works at his desk on the House floor on Monday as representatives debated the state budget. The House approved the spending plan, sending it to Senate. Lawmakers face an adjournment deadline of next Wednesday.

The Alaska House passed a version of the state operating budget Monday that would bring back the Department Fish and Game and Office of Children's Services to Wrangell, but the spending plan still needs Senate approval and the governor's signature before the two jobs could be restored.

The Legislature tried last year to fund both positions, but Gov. Mike Dunleavy vetoed the appropriations. His spokesman said the fisheries managed out of the Wrangell office coul...