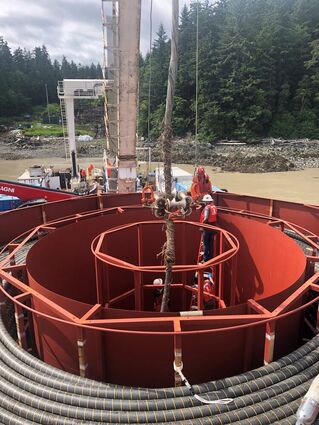 The same 220-foot-long cable barge that pulled up the broken portion of an undersea power line between Vank and Woronkofski islands also unspooled 3.5 miles of new cable for the connection between Wrangell and Petersburg. The marine work was completed in July, with final installation underway at the shoreside connections.

The marine work is done and all that remains are the final shoreside connections and testing, and a new undersea power cable between Woronkofski and Vank islands will be ready to carry electricity.

The cable repair barge that pulled up the broken line and laid down 3.5 miles of new cable has left, with the onshore work expected to take until about mid-August, Trey Acteson, chief executive officer of the Southeast Alaska Power Agency, said July 29.

At its deepest, the crossing is about 700 feet, though the broken cable was in water about 300 feet deep, Acteson said.