By Mead Gruver
The Associated Press 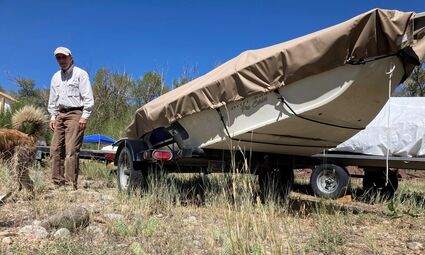 Tom Wiersema, who has been trout fishing on the upper North Platte River in Wyoming since the 1970s, stands by his drift boat near Encampment, Wyoming. Low water caused him to stop fishing by boat on a long stretch of the river earlier than usual this year. The upper North Platte is one of several renowned trout streams affected by climate change in the western U.S.

SARATOGA, Wyo. (AP) - The North Platte River in southern Wyoming has been so low in places lately that a toddler could easily wade across and thick mats of olive-green algae grow in the lazy current.

Just over two years ago, workers stacked sandbags to protect homes and fishing cabins from raging brown floodwaters, the highest on record.

Neither scene resembles the proper picture of a renowned trout fishing destination, one where anglers glide downstream in drift boats, flinging fly lures in hope of landing big brown and rainbow trout in the shadow of the Medicine Bow Mountains.