Elders light up the board with winter bingo games 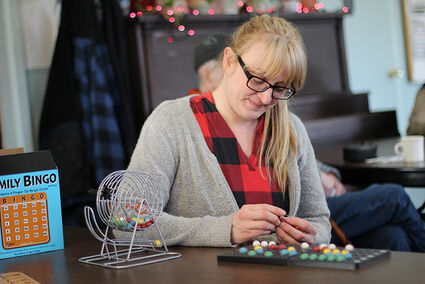 Site manager Solvay Gillen reads off bingo numbers for seniors who played after lunch at the Wrangell Senior Center on March 9. The participants played until "blackout" - when every combination of letters and numbers had been filled, and everyone got a turn to win a prize.

Sunlight streamed in through the windows of the Wrangell Senior Center where a handful of elders gathered after lunch last Wednesday to play bingo until "blackout" - the second such gathering since the center reopened to group activities after pandemic safety measures eased in light of declining case counts.

Lunch wrapped up early, so the game began at about 12:30, with Solvay Gillen, site manager, calling out letter and number combinations. The bingo cards were well-loved, American Legion Auxiliary-branded, heavy, sturdy boards, with little slider tabs to toggle a transparent red square to...