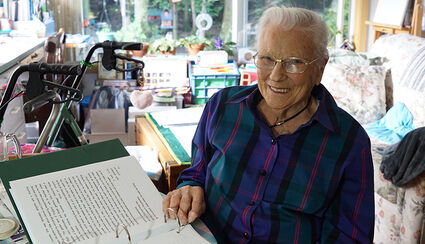 Jacquie Dozier looks over the journal entry about her time in 1965 as an exchange teacher in Britain. Dozier and the other teachers from the U.S. in the exchange program went to Buckingham Palace in London to have lunch with Queen Elizabeth II and the Queen Mother.

A nine-course lunch in 1965 left an indelible mark on the memory of a young teacher from Denver.

Queen Elizabeth II died on Sept. 8 at the age of 96, but she left an historical legacy that included a meal with Jacquie Dozier. Though it was just an afternoon in the 70-year reign of Britain's monarch, it profoundly affected Dozier and created a memory to last her lifetime.

Dozier, now retired and living in Wrangell, began her teaching career at the age of 19. She was born in Michigan, made her way to Illinois for a time, and moved to the Denver area when she married her first husband, John Ha...