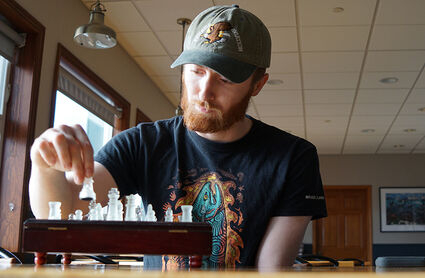 Josh Fish plays a game of chess. Fish has been playing the game since he was a freshman in high school, and he's started an afterschool club for third through fifth graders.

Josh Fish would like to see kids win at the game of life across the board rather than be pawns, so he took a gambit with a classic game.

The first chess club will start after school next Monday at Evergreen Elementary, with Fish and helpers teaching students the rules of the game, with the hope of developing social skills and critical-thinking skills in the young players.

Fish, 25, learned to play chess in Fayetteville, North Carolina, when he was a freshman in high school. The game turned his life around by changing his thinking and approach to interacting with other people.