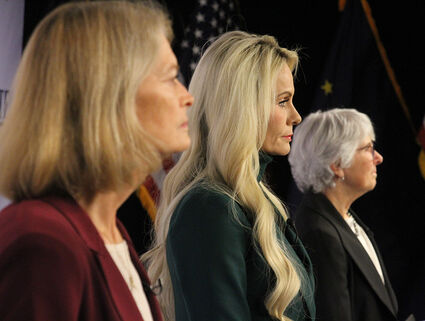 In the final debate of Alaska's U.S. Senate election, incumbent Republican Sen. Lisa Murkowski and her principal challenger, Republican Kelly Tshibaka, argued about contentious issues including abortion and gun control, but their biggest difference was one of strategy and bipartisanship.

During a fast-moving hour Oct. 27, Tshibaka criticized Murkowski for working with Democrats and the administration of President Joe Biden during her latest term in Congress, while Murkowski defended her choices and said they allowed her to deliver results on Alaska priorities, including infrastructure spending. Tshibaka would be unable to do the same, Murkowski argued.

"This Senate race is really about who can best deliver for Alaska, and the record is out there in terms of what I have done for Alaska every single day. Every single day," Murkowski said.

A fourth candidate, Republican Buzz Kelley, is on the ballot but has suspended his campaign and has endorsed Tshibaka. He did not participate in the debate.

Appointed to the Senate by her father, then-Gov. Frank Murkowski, in 2002, Murkowski earned a reputation for pragmatism in her latest term, working with Democrats and moderate Republicans to write a $1.2 trillion infrastructure bill that includes billions of dollars in Alaska-related provisions.

All three members of Alaska's congressional delegation voted for the bill.

"Anybody who says they wouldn't vote for that bill is not from the state of Alaska, unless you like these potholes around here," then-Congressman Don Young said in a speech three weeks before his death earlier this year.

During this year's campaign and at last week's debate, Tshibaka criticized Murkowski's role in drafting and supporting the bill.

"Alaskans are paying for inflation from the infrastructure bill," Tshibaka said.

Tshibaka also has repeatedly criticized Murkowski for voting in committee to support the nomination of Interior Secretary Deb Haaland, the first Native American in the role, and she did so again in the televised debate.

"One of the chief things we've got to pick up in this next session is clearing away these regulatory hurdles that the Biden administration - through the nominees that you confirmed - have set up to block our access to infrastructure," Tshibaka said.

Haaland's nomination would have advanced without Murkowski's "yes" vote, and Murkowski noted that millions of dollars have already come to the state, including $30 million announced that day for Tanana Chiefs Conference to install high-speed internet in parts of rural Alaska.

"It is funding that is coming out to the communities literally as we speak today," Murkowski said.

Chesbro said she supports infrastructure funding and thanked Murkowski for her role in helping the bill go through Congress.

In a series of questions focused on social issues, Tshibaka and Murkowski differed on abortion access and the rights of LGBTQ Alaskans.

Murkowski supports putting abortion rights in federal law and has proposed legislation to do so, while Tshibaka labels herself "pro life" and said she supports a federal law that would ban abortion under some circumstances.

She said she supports proposals to allow birth control without a prescription and through the mail. Tshibaka opposes medications that cause abortions. She includes the "morning-after" pill, which most medical groups have said work as emergency contraceptives.

She said she might support segregated sports teams for transgender men and transgender women.

That is a position that supporters of transgender rights say is discriminatory.

"There should be no discrimination against anyone at any time," Murkowski said. "That is bullying and villainizing young people at a time in their lives when that is highly destructive, when people like Kelly Tshibaka preach conversion therapy."

Murkowski's comment referred to an article Tshibaka wrote in 2001, while a college student, in which she said, "unlike race or gender, homosexuality is a choice."

Tshibaka has since said she no longer holds that view.

Chesbro said she recently attended the funeral for her son-in-law, a transgender man, and said "one of the things that we had at his memorial service was the group of people who had obviously been ... marginalized, bullied throughout their entire lives. You couldn't have asked for a better group of people. I would support the LGBTQ group forever as a principle," she said.

Murkowski and Tshibaka also differed on a question about whether former President Donald Trump should testify in front of the committee investigating the Jan. 6, 2021, insurrection at the U.S. Capitol after that committee issued a subpoena.

Murkowski, who voted to convict Trump in the post-insurrection impeachment trial, said Trump should testify under oath but she doubts he will.

Tshibaka did not answer the question, saying instead that "the legality of this subpoena is being adjudicated in the court system now, and that's the proper place for it to be determined."

She added that she hasn't heard about the Jan. 6 committee when she talks to voters.

Nineteen candidates competed in Alaska's Aug. 16 primary for U.S. Senate. Under Alaska's new voting system - installed by a 2020 ballot measure - four candidates advance from the primary to the general election, where a winner will be chosen by ranked-choice voting.

Soon after the results were announced, Kelley - who raised no money and was a surprise top-four finisher - said he would suspend his campaign and endorse Tshibaka.

The Alaska Beacon is an independent, donor-funded news organization. Alaskabeacon.com.